Micro RNA (miRNA) contained in body fluids such as blood, urine, saliva and the like is gaining attention as a promising biomarker candidate for innovation in diagnosis of various diseases. For the clinical application of miRNA diagnosis, it is vital to advance biomarker development, as well as development of simple and reliable diagnostic equipment. In particular, if small and automated miRNA detection devices can be realized, it is expected that future miRNA diagnosis will spread widely. Our laboratory aims to realize minimally invasive cancer diagnosis by secretory miRNA test in body fluids and organizes research and development team consisting of experts such as disease exosome, biodevice, biointerface engineering, high sensitivity biomolecule detection. We are promoting the research and development of biodevices integrating pretreatment of specimens using microfluidic device technology and miRNA analysis by DNA microarray. 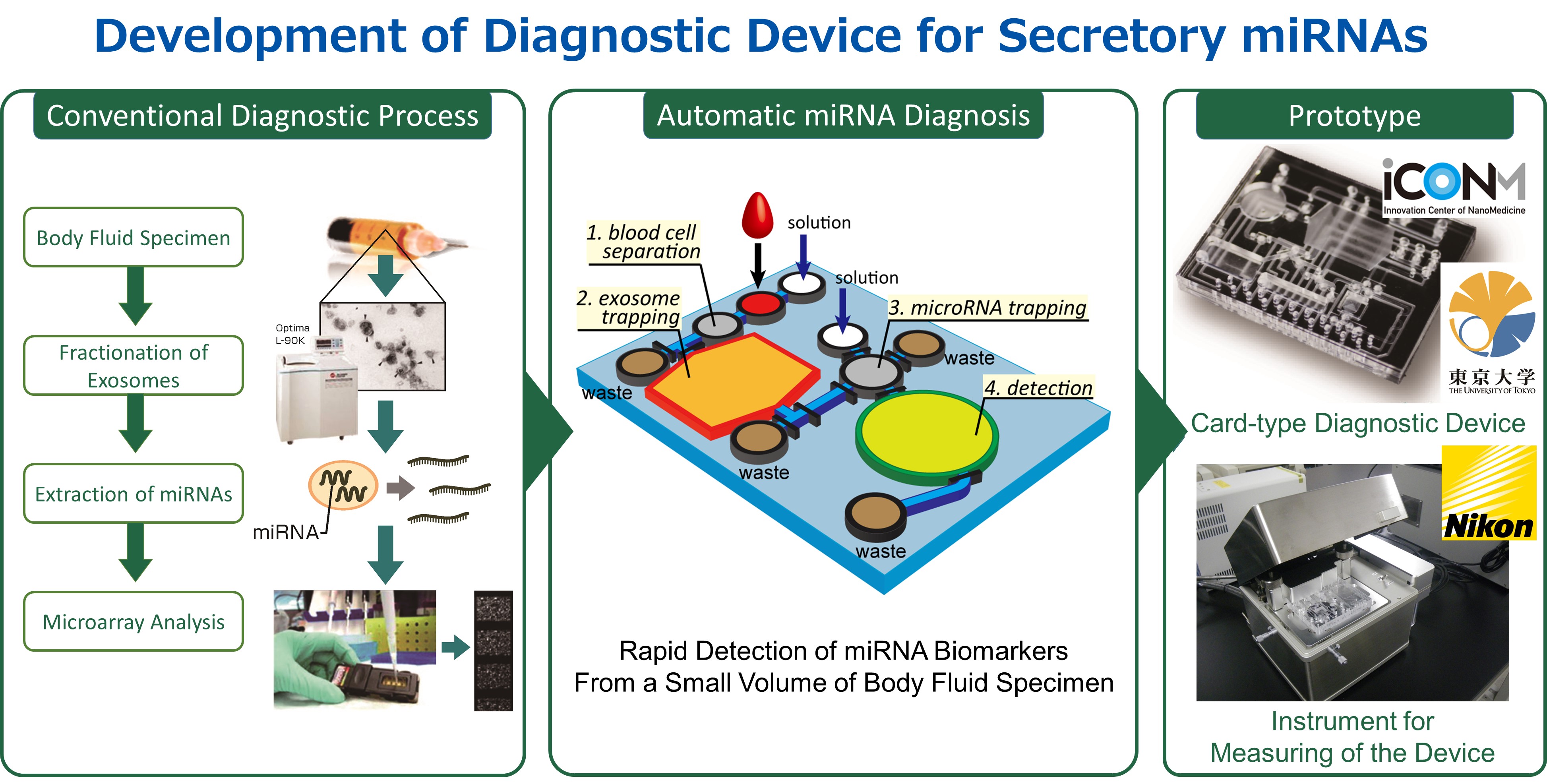 Exosomes are a type of vesicles secreted by cells. It is attracting attention as a disease marker candidate that can be used for early detection and judgment of therapeutic efficacy. Furthermore, expectations for therapeutic applications are also increasing. For example, a drug delivery system (DDS) of nucleic acid medicine, and regenerative medicine by exosome derived from mesenchymal stem cells. However, it is difficult to analyze and/or identify heterogeneous populations of particles with diameters ranging from a few 10 to 100 nm, and researchers of extracellular vesicles are seeking for new means of analyzing nanoparticles . Our laboratory is developing nanoparticle analyzer based on the principle of immunoparticle electrophoresis on a microchannel device. In this technology, the combinative use of a microchannel chip and the optical imaging system optimized for nanoparticle detection enables individual detection of small particles less than 50 nm in diameter, and can profile the nanoparticle population by the parameters such as "concentration", "particle size distribution", "surface potential", and "surface antigenicity".

Development of highly functional biomolecules such as enzymes, antibodies, peptides and nucleic acids is required in many fields such as medical, diagnostic, food processing and energy production. In our laboratory, the development of a next generation high-speed molecular evolution system that artificially evolves biomolecules on highly integrated microarray chips is under way. By integrating directional molecular evolution used as a development method for highly functional biomolecules and microfabrication technology used in semiconductor manufacturing. This technology dramatically improves the size of screenable mutant libraries (more than several million species per chip), along with strategic artificial evolution based on the quantitative analysis of big data on the acquired molecular functionality. Our final goal is to create a game changer in biomolecular evolution/creation technology.

(Supported by the MEXT grants, KAKENHI)

In the advancement in the Si chip technology accompanied with microfabrication technology enables large system integration on a small chip. The concept of our study is the integration of Si electronics and Biomaterials, which enables safe yet efficient “biological information acquisition” and “information processing and communication”. The combined use of the implantable bio-LSI chips and sophisticated molecular tools will be a promising approach toward the diagnosis and treatment inside body.